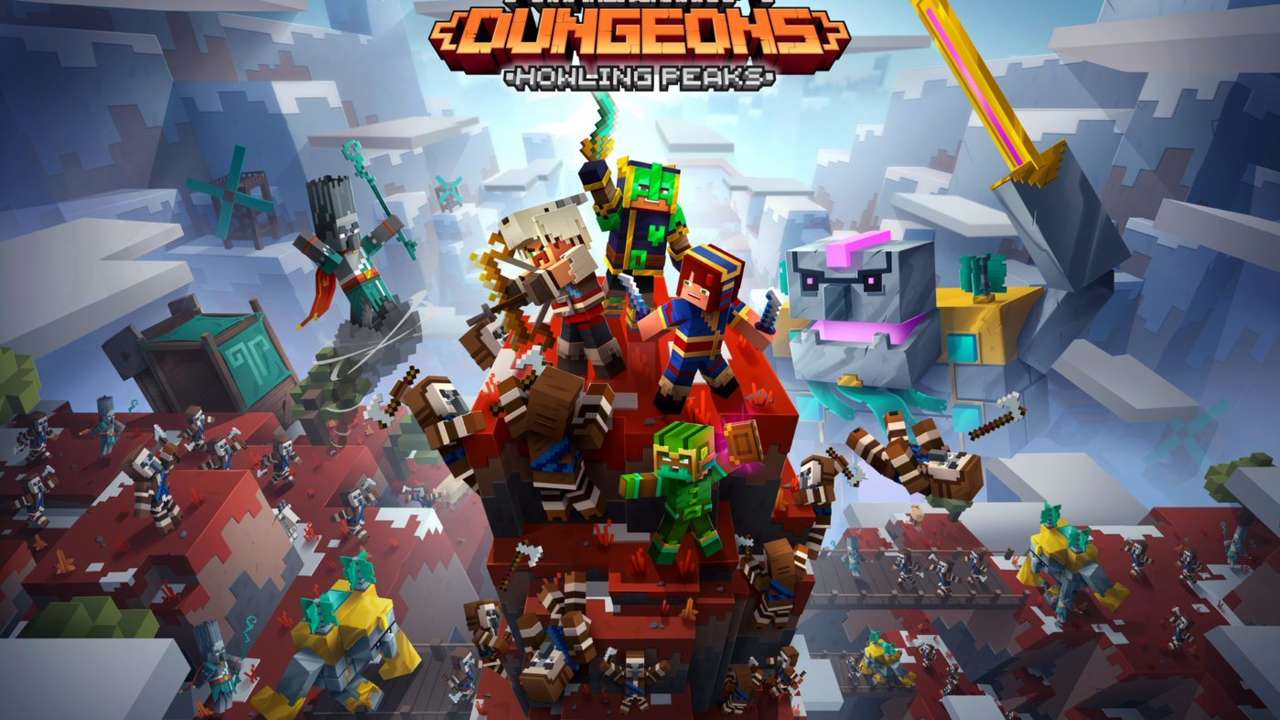 Mojang showed off new additions to Minecraft Dungeons during Minecraft Live 2020, including a new paid DLC pack and 20 new free difficulty levels, as well as details on cross-play support. The next DLC for the Minecraft spin-off is called Howling Peaks, and it will introduce new snowy biomes and a new major boss to fight.

Howling Peaks will feature the new boss Tempest Golem, which can blast adventures with high winds. Along with this boss, new missions, items, and mobs will be introduced alongside these new environments. This is the game’s third DLC, after Jungle Awakens and Creeping Winter.

A new difficulty system is also introduced, with 20 new difficulty modes added through the new Apocalypse Plus system. This will add 20 new difficulties beyond Apocalypse VII, allowing for more powerful characters and a significantly increased challenge. Along with this, new enchantments and unique items will also be added.

The first footage of cross-platform support between the PC, Xbox One, PS4, and Switch versions of the game was also shown during Minecraft Live. You can check it out below, along with images of the new DLC.

This feature will be added in a free update in the future, which is just part of the game’s content update schedule. Players will be able to experience crossplay when Howling Peaks becomes available, it seems. he. The Bedrock Edition of Minecraft already supports cross-play for the majority of systems. In fact, it was one of the first games to support the feature this generation.

Minecraft Dungeons is available on Xbox Game Pass for Xbox One and PC. The exact dates on the DLC and these updates have not yet been announced. Minecraft Live also announced a new Minecraft update centered around its caves. It’s slated to arrive next year and will dramatically improve cave environments throughout the crafting game.

The Minecraft spin-off scored a 7/10 in our Minecraft Dungeons review. Reviewer Steve Watts wrote: “Rather than changing our expectations of what games can be, it capitalizes on its own popularity to introduce young gamers to a classic genre and serves as a short but sweet treat for veteran looters. It scratches the dungeon-crawler itch with a sense of goofy charm and expands what Minecraft can be.”

2020-10-06
Previous Post: Minecraft Dungeons: Cross-Play, Howling Peaks DLC and Apocalypse Plus Difficulty coming in 2020
Next Post: How to Find Dungeons in Minecraft