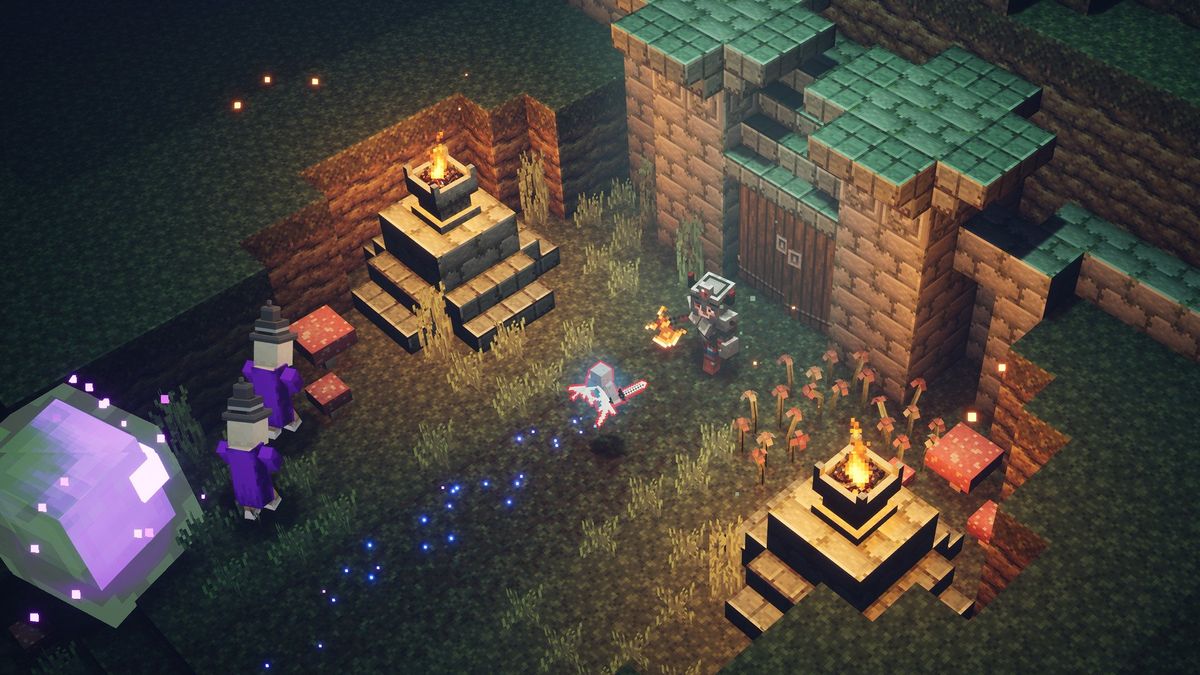 Minecraft Dungeons is an upcoming action RPG that marries the blocky fun of Minecraft with the depth and combat-focused gameplay of Diablo. We played the closed beta of the game and we’re pretty hooked.

Still, the closed beta is relatively limited in the content it offers, intended more to help Mojang find bugs and gather feedback. The full game has a much wider scope, as we recently discovered during a recent preview event with Microsoft.

We got to see a whole new area in the Redstone Mines and check out some of the weapons and abilities that aren’t available in the beta yet. Here’s a quick taste.

Minecraft Dungeons is an upcoming action RPG set in the blocky worlds of Minecraft! Team up with three friends and set out to explore the dungeons.

The Minecraft Dungeons beta gave us a look at some of its weapons, mostly the basics like sickles, bows, one-handed swords, and more. The full game, however, will feature many more weapons to customize your playstyle.

Indeed, Minecraft Dungeons does not have “classes” per se. Instead, your gear and artifact loadouts will determine how your characters feel in battle. Each character can use artifact abilities, which grant unique skills to your characters. Some might be more beneficial for melee-type characters, while others might be more suited to characters who favor ranged attacks. In our preview (and even some trailers), we can see additional skills, like a giant laser beam reminiscent of Diablo’s Disintegration Ray.

Now anyone could equip the artifact that would summon this giant purple laser. Previews and trailers also show wizard-style armor, which, combined with enchantments that reduce cooldowns, would likely create a playstyle independent of using regular weapons. One of the other spells featured by Mojang looked like a large shield you can deploy to protect your allies.

Beyond spells, we got a glimpse of an entire arsenal of weaponry, including two-handed swords, maces, and spears, as well as crossbows and other unique armor types that aren’t still available in beta. It paints a picture of a game brimming with depth, waiting to be explored.

Redstone Mines and other new areas

Mojang gave us a sneak peek at one of the new, as yet unannounced areas. The Redstone Mines represent something more in line with a Minecraft underground diving experience, in close quarters combat in narrow, winding corridors, connecting you to larger caves. The claustrophobic layouts of the Redstone Mines will require ranged players to perhaps adjust their playstyles to accommodate the smaller areas. Tankier characters will be in their element, however, able to guard their allies more effectively using the cavern’s choke points.

The world map and preview screens also feature various other areas not yet offered in the beta, including Ancient Ruins, Desert Temples, and Dark Forests. Given the nature of the world map and the wide variety of locations and biomes in Minecraft, the sky is also the limit when it comes to future DLC content. It’s easy to see how Minecraft Dungeons could become a game with a very, very long lifespan.

Could we ever see a DLC or expansion that revolves around the Nether and its updated biomes? Could we ever see an Ender Dragon boss battle? Honestly, it feels like the sky is the limit here. And since the sky limit is 256 blocks, we expect no less than 256 expansions for Minecraft Dungeons. Mojang better get to work!

May can’t get here fast enough

Minecraft Dungeon’s originally planned launch date has moved back slightly to May 26, 2020 due to the global work-from-home culture going on right now. Waiting a little longer is difficult, but it should be worth it. The beta has already proven itself in my mind, and given that this game is on Xbox Game Pass or only $20 to buy if not pretty much every platform out there, I expect Minecraft Dungeons to be a great success with gamers around the world once it finally launches. Keep an eye on this.

Minecraft and Diablo have a baby

Minecraft Dungeons takes the best of Minecraft and Diablo and mixes them with a healthy dose of action RPG goodness. It’s gearing up for an April 2020 launch and should be on your radar.